Past conferences organised by INCHES

Many experts from different disciplines visited the conference in Barcelona at the premises of ISGLOBAL. There were several workshops including a WHO workshop on e-waste. Selected papers wiil soon appear in the Journal Environmental Research.

This conference – the sixth after Amsterdam (1998), Washington  2001), London (2004), Vienna(2007) and Bangalore (2010) offers a world-wide platform dealing with health problems of children caused by important environmental influences. 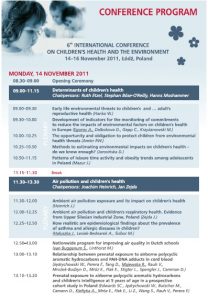 The conference had a tremendous participation from Asian partners, working on children’s environmental health issues.

International Conference on Children, Health and Environment in June 2007 in Vienna.

International Conference on Children, Health and Environment. This conference was conducted in cooperation with the EU-funded project PINCHE.

International Conference on Children, Health and Environment. This event was attended by more than 500 participants. The last day, September 11, was broken off due to the events in the USA.

International summit on exposures to environmental hazards during early life and their long term consequences, with a focus on exposures, mechanisms, health effects and implications for clinical practice and policy.